The Palace of Illusions |Book Review by 13 year from Vadodara

Here is the first in the genre of Indian mythology- a very popular category amongst readers.

13 year old Tatvi Shah from Vadodara shares this wonderful review. She is a student of Delhi Public School, Vadodara 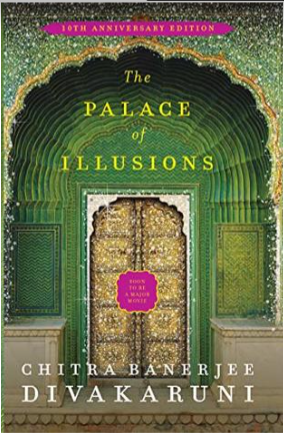 Title- The Palace of Illusions

I recently read this book by the Indo-American author, Chitra Banerjee Divakaruni.

I got this book as a present on the festival of Raksha Bandhan from my father. It has been a tradition in my house of tying rakhi on my father’s
wrist and he gives me the most valuable gift of  the year. We consider ourselves as siblings of last birth!

This book was worth-spending on as I always wanted to read mythology books written by Chitra Banerjee Divakaruni, as i wanted to discover her  perspective about the characters of Mahabharata.

I was fascinated as soon as I saw the cover page of The Palace of Illusions.
The picture on it intrigued me as it shows a beautifully carved gate and it feels that walking through it leads to a new life.

The unpredictable life of Draupadi, having been produced from fire to her final  journey to Mahaprasthan, builds up the climax of this entrancing novel. The  storyline includes narrative about her relationship with her brother, the  desolation that she faced in her father’s palace, the relationships with her only  sister, Sikhandi; her life as the spouse of the five Pandavas and how  she triggers the Mahabharata war.

Draupadi is the protagonist of the book. She has been fascinatingly illustrated  through this book where we almost envision ourselves in her shoes. Chitra  Banerjee has portrayed Draupadi as a lady with a voice, who is not reluctant to  convey anything which she thinks is perfect. She is a charismatic woman with  ego.

Draupadi and her brother were born from sacred fire after prolonged prayers, to King Drupad.Even then she had to suffer the strict gender bias. These views of the patriarchal society are the biggest problem the world is and has been  facing from years immemorial.

The central idea of the story is that the author chose a female character that  was tainted as she wanted to demonstrate that even women have equal rights and should be given equal dignity as received by men.

I savoured the part  when Draupadi pesters Sage Vyasa to know more about  how sorrowful her life is going to be. When Sage Vyasa responds with due  respect that she is going to be the wife of five husbands and also the queen of  a pompous kingdom, Draupadi, and I were on seventh heaven to know that she would become the queen. To me this is the most delightful part of the story,  based on my opinion.

If were the author, I would add the account of the events that took place during exile and war in particular. The war and exile are two essential parts of  Draupadi’s biography. I would fancy writing less about her lamented life and  elaborate on her espoused life after the war also.

This is a book which can be read by anyone comfortable in English but I would  recommend this book for  13+.  This would help them know more about how to  deal with struggles.

Evaluating this book with stars is a challenging decision but actually, this wonderful book has changed my view about Draupadi. I give this excellent book 4.5 star.