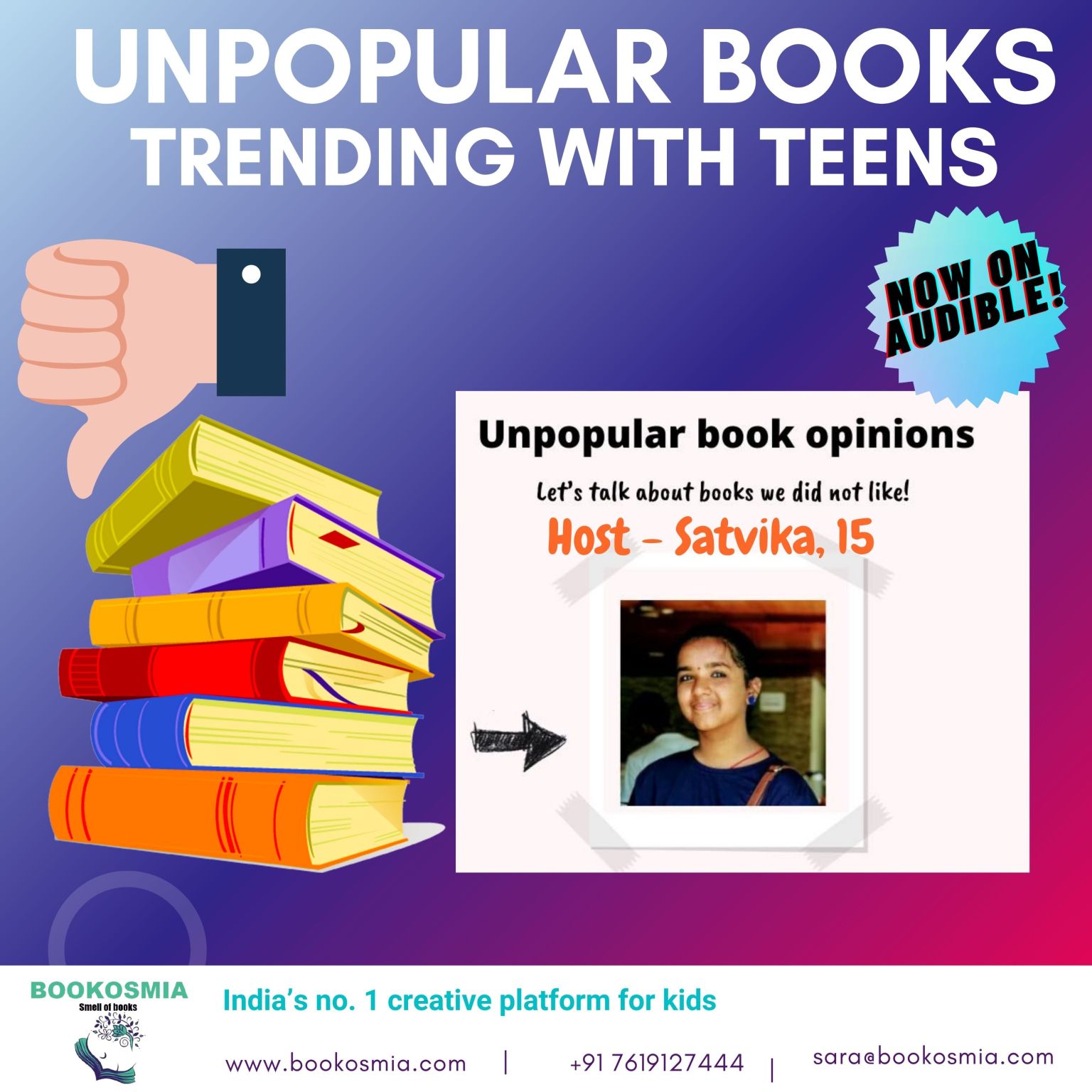 Talk of favourite books and a whole list comes to mind. But wait wait wait! Not so fast. What about ‘unpopular opinions’ on popular books? Yep they exist too! So what do the teens of today feel about books that missed the mark? Bookosmian podcaster Satvika Suri, a 14 year old from Bangalore explored this subject with her friends Disha and Poorvi on the first episode of ‘Trending with Teens’ – India’s first live podcast by teenagers.

The podcast opened with bookworm Satvika revealing that while she was obsessed with books, she was open to different opinions. Disha felt the same and reiterated the need to respect diverse opinions without spreading hate or disrespect.

So how did these teens get into reading?

For Poorvi, it all started with Harry Potter. Fantasy as a genre interested her and she began devouring them one after another. Interestingly, Disha and Satvika had the same experience.

“Harry Potter drags people to reading,” observed Satvika as she laid bare the first unpopular opinion of the day.

Disha and Poorvi vehemently disagreed. Poorvi thought the series deserves all the love it gets.

Satvika, on the other hand, believed there were better fantasy reads than Harry Potter.

Is Harry Potter the hero of the book?

Satvika had some strong takes:

Poorvi and Disha agreed that the story was magical because of the relationship between the characters and that the plot was the actual hero of the book.

Is Harry Potter too dark for kids?

This question had all three podcasters agreeing with one another. Satvika said that while the book is what it is because of its awesome writing style, it seems appropriate for kids only till book 3. Disha said that the series ages with each book meaning that from book 4 onwards, parents should use their discretion to decide whether the books would be suitable for their children.

In recent years, JK Rowling has evoked some strong reactions due to her personal opinions. Is it possible to like a book but not the author or vice versa?

Satvika didn’t think it was right to judge a book based on the author’s reputation. Art and artists are two completely different entities and therefore we should not judge one thing by the other, said Poorvi.

A book turned into a movie you didn’t like

Too many to count, squealed Satvika! But their guns were trained on Percy Jackson especially because:

Disha said that in the case of books it’s all in your head so when you picture it in your head and when it’s on the screen it’s a completely different thing making it a major let down for a reader.

Satvika gave an example to elaborate on the point. She couldn’t come to terms with the casting of Rupert Grint as Ron. He looked like nothing she had imagined when reading the book.

A movie that was better than the book

The Hunger Games, according to Disha. The books were boring for her but she finished three movies in three days.

Popular books that are not that good

The Fault in our stars

For Poorvi, it is a book very close to her heart. It was the first book she cried over and it was so emotional she wasn’t able to put it into words.

Satvika warned that Poorvi might want to kill her for her opinion but :

Book recommendations for 13+ by the podcasters

Are classics still read by the teens of today?

Satvika is more of a contemporary fiction reader but Poorvi loved Pride and Prejudice while Disha loved The Christmas Carol and The Time Machine.

Finally, are ebooks taking over paperbacks?

For all the three podcasters, the ebook was a life saver during the days of the lockdown but now they have gone back to good old physical books. More power to them!