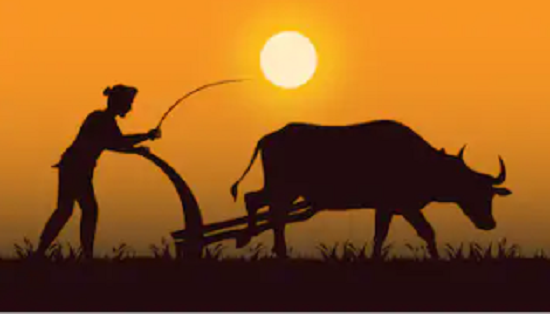 This story is about Bhola and his ox.

Bhola was a farmer. He had a small farm where he used to work and grow  crops. Bhola had a bull for his farming named Kallu, who ploughed the whole land. After a whole day’s hard work, Bhola would sit with Kallu and talk.

Bhola was a happy and satisfied person but his neighbour Shankar did not like  this. Shankar was a rich man with a huge farm and also a tractor but he always wondered how Bhola managed to stay happy with his small farm.

“I have a huge farm. I also grow a lot of crops get money in return. I think his ox  is the reason for his happiness. He keeps talking to the ox. ”

Shankar went to Bhola and said, “Brother Bhola, I want to buy your ox.”

“But brother, you already have a tractor.”

“Yes, I have but the thing is I can’t do all work with the tractor. So I thought if you will sell your ox him to me , I’ll give you good money.”

“No no, please don’t feel bad but I don’t want to sell my ox. Please find some other ox.”

Shankar came back to his farm and started thinking if there is something special about Bhola’s ox and hence he is not selling it. But Shankar was determined to buy it. He thought that if Bhola doesn’t have his farmland, he would surely sell it.

That night Shankar burnt Bhola ’s crops. Next day, when Bhola saw his field,he sobbed with sorrow. “Oh god ,what did you do!”

Shankar was happy seeing Bhola sad now. He was certain now he will win.

Many days passed and Bhola was counting the money he had saved.
“Six… seven… eight… nine… and ten. That’s it? I have only ten silver coins. That  will only last for a few more days. I should sell Kallu to some new owner. So  that at least his new owner feeds him.”

Saying this Bhola took Kallu and left for the market. Bhola held the money bag.
After walking for a while, Bhola thought, “I have only ten silver coins and if on  the way, some robbers or pickpockets take it, then nothing would be left with me. It ’s better I tie the bag around Kallu ’s neck.”

Bhola tied the money bag around Kallu ’s neck. After walking for a while, Bhola  stopped at an eatery. He decided to eat something and tied kallu to a tree outside.  When Bhola was eating inside, the owner of the food joint came
out. He looked toward Kallu and saw a silver coin falling from Kallu’s neck. The owner was shocked! “Oh, what is this? An ox that gives coins?”

At that moment, one more coin fell … this is a magical ox. I wish to buy maybe  his owner doesn’t know about it.

Now Bhola returned. The owner approached, “Do u want to sell this ox???

“I can offer you a thousand silver coins for it .”

Bhola got thousand coins in exchange. He took the money to the market and bought four cows. Bhola was too happy! He returned to his village with cows.

Bhola opened a dairy and soon got rich. His neighbor was miserable with jealousy.  Bhola’s ox proved to indeed be magical for him.

PrevPrevious“Poojo for me is about meeting different people,” by 9 year old Srijon Chakrabarti from UK
Next‘One festival, many traditions’ by 9 year old Ishaan Satheesh from ChennaiNext
Upcoming Events
Submit Your Own Stories
Submission Guidelines