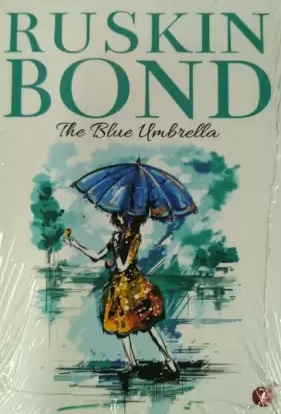 Today’s review is of a book, by the much celebrated Ruskin Bond.

After seeing the cover page of “The Blue Umbrella,” I thought maybe it could be about rainy season.

But the creativity of Ruskin Bond surprised me .

I havent read such a creative, sweet story ever .

The lead character in this story is Binya who had fair skin, pink cheeks, brown hair,  glass bangles on her hand, a necklace and loved nature . She is also  sensitive towards people .

Its about how Binya got the beautiful blue umbrella, how she protected the umbrella from wind , dust , rain, from villagers and especially from Ram Bharosa.

Binya protected the umbrella . In the process of protecting the umbrella, she  realized that unwantedly she heard the feelings of Ram Bharosa. Since he tried to steal, Binya took the help of Ram Chandran, who was working in Bharosa’s shop. Because of this all people stopped buying from his shop .

Seeing this Binya felt guilty and gave the blue umbrella to Bharosa. Meanwhile, Bharosa also realized his mistake. He called Binya and gave her a necklace  with a pear paw pendant which was considered lucky.

I loved the writing style, especially the usage of personification. It was interesting to read of non living  things having the character of living things.

My favourite part is when Binya gives the most important thing in her life to  Ram Bharosa. I learnt that human relations are more important than things.

I would recommend this book for age 12 +

PrevPreviousPeace is like the wind blowing on a foggy day- Poem
NextFriendship, in the Arctic- StoryNext
Upcoming Events
Submit Your Own Stories
Submission Guidelines