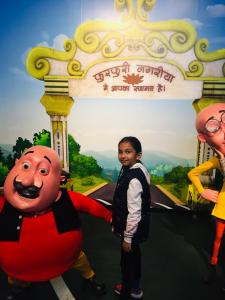 Once upon a time, there was a baby bear, who was very hungry. But mama bear was strict about no snacks in between meals, so he decided to find some
yummy honey for himself.

When he was passing by the trees, he saw a bee-hive and thought, “How can I
get some honey from here?”
His first idea was, “I will pick up a stone and hit it towards the hive.” But what a
bad idea that turned out to be! The angry bees came out and started stinging
him. He ran faster than he had ever run before.

He found another tree with a bee hive. His second plan was to climb up the tree. But that didn’t work either as he was very heavy, the branch  broke.

Then he thought more and more. Finally an idea flashed to him. His idea was to flatter the honey bees. He told the queen bee that she should be the queen of the jungle. She should sit on the highest chair.

And the bees were tricked into his plan.

At that moment mama bear and sister bear came. They heard what baby bear
was saying and felt bad. Sister bear said to the bees, “Sorry, he was flattering you to steal the honey.”

The bees were shocked but forgave the baby bear as he was little. Mama bear said, “Beary, it is good to say nice things but not if you are doing it for stealing from them.” Baby bear understood and said he will never do that again. Then  they went back to their cave and baby bear ate the honey that mother bear had kept for him.