Mithali Raj- How you inspired me!| Essay by Siddharth,13,Mumbai

Mithali Raj hung up her cricketing boots this week. Why is she so special? 13 year old Siddharth Varadaprasad from Mumbai tells us in this fabulous profile. 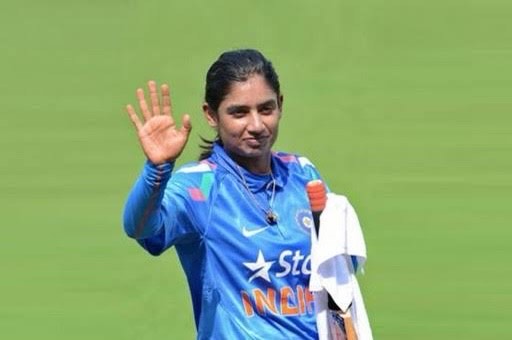 Mithali Raj, arguably the world’s best women batter and Indian captain announced her retirement this week. Let me tell you why everyone must know about her.
Mithali Raj was born to Dorai Raj, an officer in the Indian Air force and to Leela Raj in December, 1982. She was born in Jodhpur but she soon shifted to Hyderabad. Mithali started to play cricket at the age of 10. In a BCCI interview, she stated that she was introduced to the game by her father who wanted her to become active. Here, I can relate to her as even I started pursuing cricket as a medium of exercise but grew fond of playing the sport over time. Mithali Raj has admitted that she never wanted to play cricket and had other hobbies such as dancing. Initially she played cricket only because her parents forced her to. It was only afterwards when she became good at the game that she started to enjoy it. Sometimes its also a good thing to just listen to our parents without questioning their decisions!
Once during her net sessions at S.T Johns cricket academy in Hyderabad, Mithali Raj was spotted by first class cricketer, Mr. Jyothi Prasad who saw her talent and sent her to a renowned coach by the name of Sampath Kumar.  When she was 14, she was picked in the reserve squad for the 1997 world cup. This was her first-time that she was part of a proper squad and she felt out of place. She even thought of quitting cricket but was consoled by her parents. In 1999 she finally played her first match and shocked the world of cricket by scoring an unbeaten 114 runs against the Ireland women’s cricket team. She made the whole of India stand up and take notice of her – the shining new talent who was about to revolutionize India’s women’s team and women’s cricket.
Soon after she made her test debut against South Africa and in just her third test, she made a world record. She smashed a mind blowing 214 runs breaking the highest individual women’s score which at that time was 209 runs. She then was named the captain of the women’s team in 2004 at the age of 22 which made her the third youngest captain in women’s cricket. Now some might have considered her to be a poor choice initially as she was still quite inexperienced, however doubts about her capability quickly disappeared after she led the team all the way to the 2005 World Cup final. Sadly, Australia proved too strong in the end resulting in them winning by 98 runs.
However, Mithali took this defeat as a lesson and urged the team to move on and look forward. Now here I would like to compliment her as rousing a team after a horrific defeat right at the brink of success is never an easy task, and let’s not forget that she was still very young at the age of 23. The following year she captained the team to their first ever test – series victory in England. 2006 was a great year for her. She scored a mammoth 684 runs in a span of 23 matches. In this way she led the Indian women’s cricket team to many wins and kept on winning laurels.
Now here is a fun fact, Mithali is often seen reading books to calm herself before she walks out to bat. She has said that it calms her and eases her nerves before the big moment. I also personally find reading very calming and encourage kids my age to take up reading instead of being glued to a screen all day. (And this is why you should also become a Bookosmian like me!) 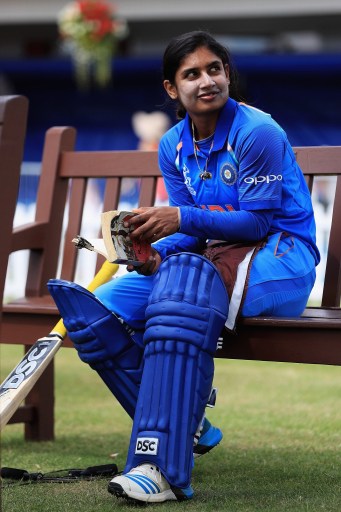 Mithali Raj’s noteworthy achievements over her career that has lasted for a long 23 years have been several. She has amassed 10868 runs and is only the second to have reached this feat. This feat had me very impressed as not many successful men cricketers have achieved this goal which made me follow women’s cricket a bit more than I used to. She has scored the most amount of runs in Women’s ODI, has the longest career span for women in ODI, is the youngest woman to score a 100 on her ODI debut, has an impressive 85 half centuries and 8 centuries.
It is no wonder that she has been the recipient of several prestigious awards. She was awarded the Arjuna award for cricket in 2003 when she was only 21. I was very impressed with this achievement of hers as well because I did not know that one could obtain such a prestigious award at such a young age. This was followed by several others including the Padma Shri award in 2015, Wisden leading Women Cricketer in the World in 2017 and the Khel Ratna Award in 2021.
I personally really appreciate how consistent she has been in her career. Yes, it is true that she has had some rough patches losing a few games here and there but she has always recovered from it and come back with a bang. She has also made people notice women’s cricket by making a name for herself.
Here I would like to put in my view that women’s cricket is still ignored a lot compared to men’s cricket and this should not be the case. Cricket should be followed because of how much fun the game is and without a bias in gender.
I would like to conclude this piece by saying that I am very inspired by Mithali Raj. I must admit that even I did not know her as well as say a Rohit Sharma or a MS Dhoni but now I do and I also believe that she is no less to these legends. She has received many compliments on her retirement by many legends of the game including VVS Laxman and Wasim Jaffer. Overall, she has had a glorious career and she will be missed.
=========================================================================
For this wonderfully researched piece, Siddharth received affirmation not just in India but international jounralist Firdose Moonda too! 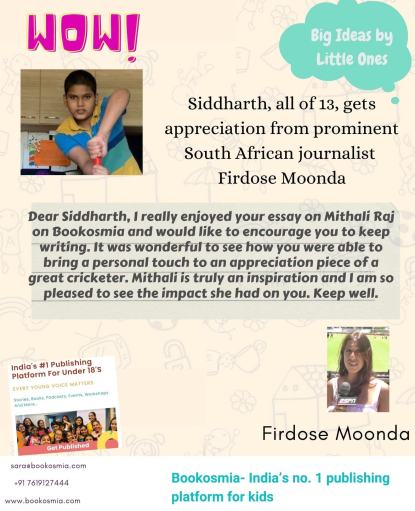