Hello Anime | Blog and Podcast at Trending With Teens 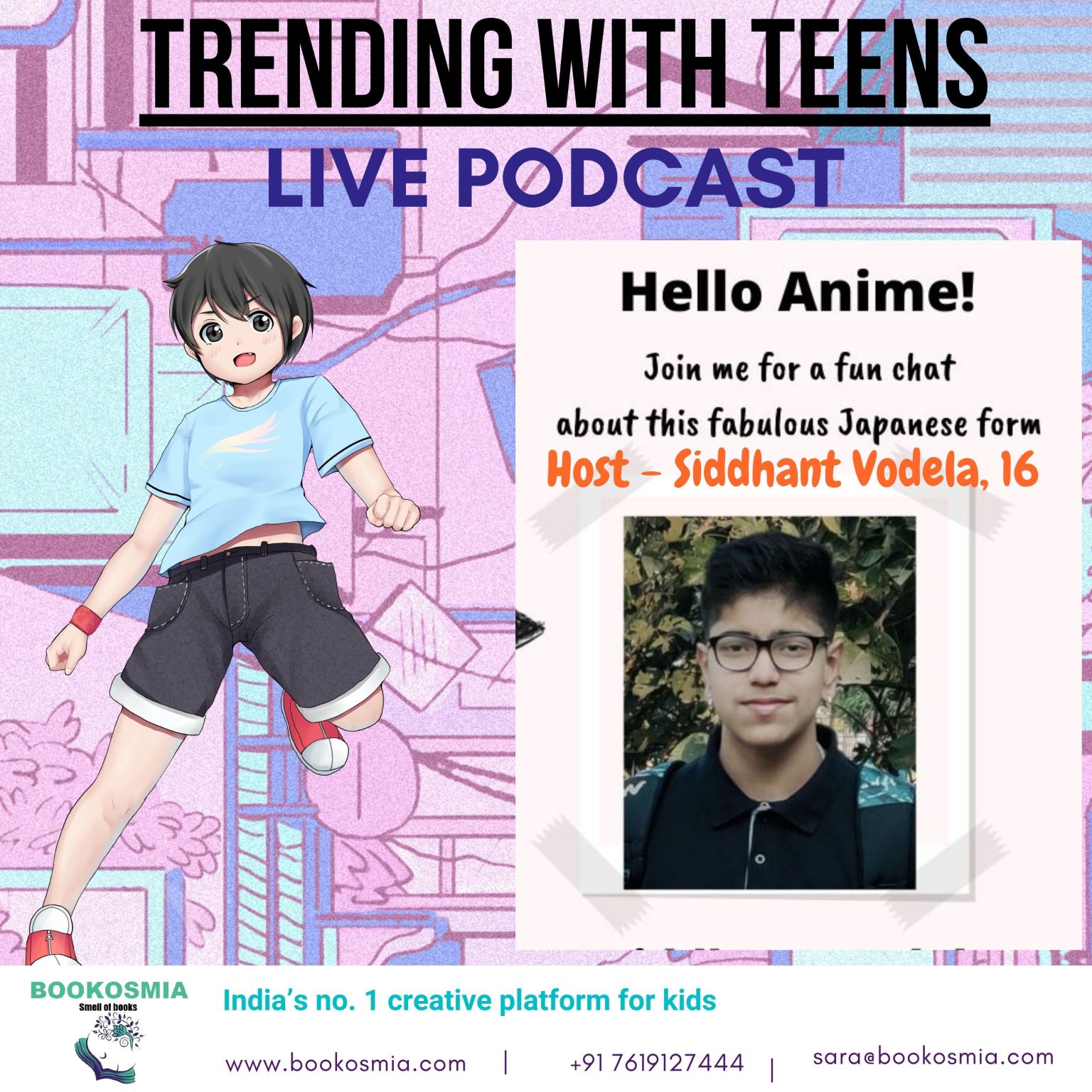 A style of animation popularized in Japan but now has fan boys and girls all across the world. For Siddhant, it is an art form that transcends emotions like happiness, anger, love – a different world in itself.

Yes! At some point we have all seen an anime character. Heard of Doraemon or Pokemon? They are all universally loved anime shows. In fact so popular are the dubbed versions of these shows that most children who grow up watching it in their native language get a shock when they find out one day that the original version is in Japanese! Siddhant, who grew up watching Doraemon in Hindi, was one of them who had believed the show to be the pride of India!

Which show can one start with to understand anime better?

The podcasters suggested Naruto. Naruto is the story of a young boy who is possessed by a  Nine-Tailed Demon Fox. He is ridiculed by others. But he persists and slowly activates his Ninja powers. With it’s action and drama, it can give serious competition to any hit Indian movie, believes Siddhant.

What are other anime recommendations?

A bored high school student’s life changes when he comes into possession of a mystical notebook. The interesting fact about this book is that if you write a person’s name on it, the person actually dies. Satvika found the series ‘creepy but cool’.

Highschool of the dead

A deadly pandemic strikes earth and turns humans into zombies. The story focuses on a group of high school students as they deal with the pandemic and the after effects of collapsing society amidst panic.

A teenager is determined to become a demon slayer after his family is murdered and sister is turned into a demon.

In a world of superheroes, a boy without any superpowers is born. So he gets bullied and wishes to have some kind of a superpower.  One day, he eats up a super hero’s hair and the DNA passes on to him and he gets all the superpowers of that super hero. Do check what happens next!

You can also check out Spirited away, The seven deadly sis and Cursed by light, Fruit basket and From up on poppy hill.

What are some interesting features of anime?

Anime isn’t always action packed. Series like ‘The Slice of Life’ are focused on the mundane, day to day events with no big conflicts. One director who mastered this is our very own Satyajit Ray whose movies like Pather Panchali and Apur Sansar aesthetically concentrated on little moments.

Villains in anime movies look so cute that you don’t feel like killing them! They are mushy, cutie pie people, the podcasters said.

Anime leaves the viewer on a cliffhanger on almost every episode. A case in point is the Dragon Ball series which follows a young martial arts proponent as he explores the world in search of Dragon Balls that can summon a wish granting dragon.

There is a moment in this anime where one of the characters is supposed to go and fight the villain, only for two minutes and those two minutes last for 724 episodes! Imagine that!

An anime called ‘One piece’ is about a boy named Monkey D Luffy whose body becomes like rubber after eating a devil fruit. This series

has 240 episodes. And it is coming up with three seasons! So imagine it’s a total of thousand episodes.  But even after so many episodes, whenever an anime comes to an end a die-hard watcher feels sad.

What is the difference between anime and manga?

Manga is a Japanese comic version written by a ‘Mangaka’, who is Japanese author. Anime is the name of Japanese animation.

Any anime series that is binge worthy?

Animes have a whole range and as Reva put it- “Once you start watching, you will find it hard to stop.”