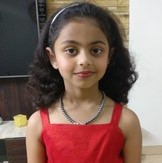 Hey friends! Sara, here. 8 year old Aarushi Yerrappareddy, a Bookosmian from Hyderabad, keeps us hooked in this action packed story about a battle of two princes to save Candy Land and its princess!
Congrats to Merry Go Learn for nurturing her creativity. She goes to Deans Academy.

Once upon a time, there was a prince named Shaggy. He lived in the magical world of fairies. It was a beautiful land that contained many castles, elves, fairies, pixies, rose flowers, and many more magical things.
On another end of the world, a human prince named Bob lived in the exotic land of Africa. It was a land thriving with wildlife and plants. Animals of all kinds lived there happily and a variety of plants could be seen if one took a tour through the deserts. The land was hot and humid, but was bustling with rich flora and fauna.
One day, Bob got to know about the world of sweet treats, the Candy Land. It was a land filled with chocolate fountains and rivers. The trees blossomed with sweets and lollipops. The flowers contained sour candies and the grass was also edible. The riches of the Candy Land’s king were world known. Bob was jealous of the candy king, so he planned to kidnap the candy princess, Lela.

One night, he sneaked into the Candy castle and kidnapped Lela while everyone in the castle was sleeping. The next morning, the king realized  that his daughter had been kidnapped!
He ordered his men to look around the whole Candy Land and find the missing princess. The men searched the whole land but failed at finding the princess.
Finally, a small kid approached the king’s court and gave him a piece of paper that said that the princess will be released only if the king gave all his wealth to Bob.
The candy king was a wise man. He was saving all his wealth to distribute it amongst his subjects to help them run their homes. He first decided not to abide by the instructions of Bob and planned to fight him.
Receiving this news, Bob sent another letter to the king saying that if he got his army anywhere near Africa, he would kill Lela.

Poor, helpless candy king was left with no option but to fulfill Bob’s demands. As he was about to do so, his queen stopped him! She told him a way out of the problem in which the wealth would not have to be given to evil Bob, and the princess would be saved too!
The queen discussed her plan with the king, and soon the announcement was made in the whole Candy Land. It said whichever brave man saved princess Lela will be awarded handsomely. This news spread to different lands, finally reaching the Fairy Land. The fairy prince, Shaggy decided to go and save Princess Lela. On reaching Africa, Shaggy got into a violent fight with Bob.

← Prev Next →
All Stories