Today’s review by 10 year old Siyona Bakshi from Gurgaon, is of an extremely pertinent book on standing out like a sore thumb, and how to deal with it.

Siyona enjoys listening to music and reading books. Her list of favourite authors include  Sudha Murthy, Enid Blyton and Roald Dahl. Inspired by them, she loves to pen down her thoughts in the form of short stories and dreams to publish them in a book someday. She is a great orator and loves to connect with her friends. Siyona loves to dance and is learning Kathak. She is a student of Lotus Valley International School, Gurugram. 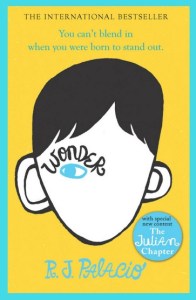 Have you ever wondered what would happen…
If you don’t look the way you look,
Eat the way you eat and
Feel the way you feel about yourself.

This is a story of a struggling boy named August, who was born with a special  physical condition, ‘Small Anomalies,’ a disease in which the face seems like it  has been melted.

August says, “Though I see myself as ordinary, other people do not.’

The story revolves around a motivating thought that, ‘You can’t blend in when  you were born to stand out.’ This beautiful phrase adds to the beauty of the cover page and ignited my interest to discover more about the book. The lead character, August Pullmann was obviously unhappy with his special situation,  however, his sister Via and his parents supported him a lot. August was  homeschooled by his mother and had never been to school till he was ten. His  parents wanted him to do so but he was petrified. However, his parents  convinced him by saying,” It is the first year of middle school, it’s a new school  for everyone so everybody would be new to each other.’

August has been portrayed as a child who wonders everyday as to why such a  thing happened to him and also that it is beyond his control to do anything  about his situation or the attitude of people towards him. After many ups and downs, something incredible happened with August and his happiness knew no bounds.

My favorite part in the story was the way August had shown courage even  though he was laughed at, for something which was not even his fault. This  makes him my favorite character in the story. I also liked the revelation, when August’s friends didn’t like him initially but later when they got to know the wonderful person inside him, they became his good friends. Even the part when Julian’s grandmother told him about her childhood and how he was named after a person who had once saved her life was intriguing.

This book beautifully enunciates the emotions of a boy who struggles with his special situation as well as with the world around him. At the same time, I  found the story to be quite engaging owing to the way R. J. Palacio has  presented it with abundance of humor.

Inspiring quotes added at the  beginning of each part accentuate the connect with the story and ignites the interest to read. One such quote is…

“It is only with one’s heart that one can see clearly. What is essential is invisible to the eye. ”

I earnestly recommend this book for readers, age 10 and above to gain a  perspective about how life can be so unpredictable and yet so fulfilling.