The vulture, is a bird that fascinates me! Poem by 15 year old Siddhant Vodela from Kolkata

Did you know that 5th Sep’ 20 was the International  Vultures Awareness Day. Here is a very impressive poem by 15 year old Siddhant Vodela from Kolkata that will make you appreciate this magnificent but fast depleting creature.

Siddhant Vodela is a storyteller by heart. He is passionate about writing,  poetry, filmmaking, art and animation. He also loves nature and ancient Indian history. Siddhant is a home-schooler.

The vulture, is a bird that fascinates me.
A bird that in the city sky, I never see
Yet for me, it is a mythical hero and a selfless cleaner.
A bird that lurks near the remains of death
A warrior who destroys the forces of disease and contamination.

The creature that keeps the biome clean and homely
At first glance, it looks intimidating yet regal.
Its long neck is like a lean trunk of an ancient tree
Its sharp eyes are like a magnifying glass.
Its prescient instinct to detect the demise of a creature,
Makes it the predator of death. 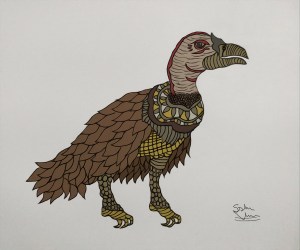 The vulture, is a bird that fascinates me.
The bird whose fame is not as expansive, as that of the great eagle or the peaceful  dove.
Yet it is as impactful, in the world of birds and the world of humans
The vulture is going subtly extinct. Yet it clings on, to survive and thrive.
The vulture fascinates me, because its heroic efforts keep the rest of us alive.

Hey, Sara here again. Did you enjoy that wonderful poem? How about some some cool facts about vultures, shared by Subhadra Devi, bird photographer  turned birder, who is now turning into a nature enthusiast. She is a member of the National Conservation Foundation (NCF), India
Cool Fact#1 :  Vulture population is depleting rapidly in India

Of the 23 species of vultures that exist, over half of them are considered either Threatened, Endangered, or Critically Endangered as a result of human impact.

The vulture decline in India and also other countries around, have been  attributed to the veterinary use of the drug diclofenac. Vultures feed on  carcasses of animals and if that animal has been treated with diclofenac a few  days before it has died, the drug remains in the body of the dead animal and  enters the vulture. Studies have found that diclofenac is lethal for vultures and  they die in droves. In India the use of diclofenac for veterinary use was banned  from 2006 due to this. But by then more than 95% of the vultures in India  were dead. Currently there are captive breeding centres in India and Nepal where they are trying to breed vultures and release them to the wild to increase the vulture population. 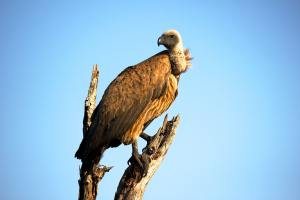 Cool Fact#2 : There are many collective nouns to address a group of vultures

As beautifully pointed out by Siddhant in his poem, Vultures are sociable  creatures and are often seen as a collective unit, but the name assigned to a  group of vultures all depends on what they are doing at that given time.Like most bird groups, vultures can be referred to as a flock, though they can also be labelled as either a venue, volt, or a committee. However, when it comes to the vulture group feeding around a carcass, they are called a wake, and when the birds are in flight formation, they are known as a kettle.

Cool Fact#3 : Vultures keep cool by urinating on themselves.‘Urohydrosis’ is a process in which an animal urinates on itself in order to cool down when temperatures reach blistering highs. However, vultures also use this technique as a means to disinfect their legs of bacteria following a feed on a rotten carcass as their urine possesses high levels of acid. 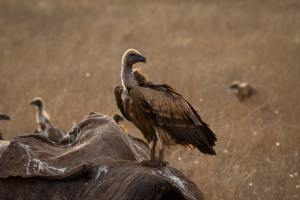 Cool Fact#4: A major part of the vulture’s diet is bones
As well as their urine, vultures also have extremely strong acids inside their stomachs. These acids not only help the birds to fight and destroy lethal  bacteria, but also help to break down the bones of the carcasses that the birds devour, which contribute between 70-90 per cent of their overall diet.

Here is a video of a vulture dropping a bone on the rocks to get to the bone marrow which is a major part of their diet.

64 Replies to “The vulture, is a bird that fascinates me! Poem by 15 year old Siddhant Vodela from Kolkata”