Today’s review by 11 year old Adwaith S Menon from Chennai is of The One and Only Ivan, a children’s novel written in first person from the point of view of Ivan, a gorilla. 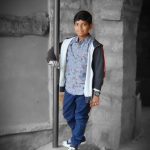 Adwaith S Menon is 11 years old and a student in Grade-6 at NSN Memorial School, Chennai. He is an avid reader and has developed a love for writing short stories as well. His other interests include sports and playing video games. 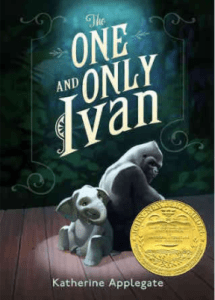 Title of the Book: The One and Only Ivan

Name of the Author: Katherine Applegate

The story is about Ivan, a gorilla who lived in the forest with his family was caught by humans who killed Ivan’s family. Ivan was then brought to a circus where he was taught to perform tricks. After being taught too, Ivan did not excel at this. Thus the head of the circus sold him to an old person called Mack who ran a small arcade. Thinking of what to do with Ivan, Mack gave Ivan a home, A fully covered glass room with a built in pool  and a basket ball. Ivan had two friends in there bob a street dog and a elephant called ruby.

Ivan is the protagonist of the story. A gorilla who never disagreed with the  humans and obeyed them and tried his best to fulfill its masters dream.

Ruby is the baby elephant who lost her family because of humans. Bob is a street dog who never liked a home but is forced to go into one.

The setting is mostly in the cold and dark place where the animals were held during the time of Mack’s ownership and even the plush green zoo.

I give this book a

Enjoyed reading this review? Do you have a book review to be published on this global writing platform? Click here to know how to become a Bookosmian-