‘The Adventures of Joey,’ by Aadya Kheria (8yrs) and Vanya Khaitan (6yrs) from Kolkata-Tangram Story #41

Today’s Tangram story by Aadya and Vanya  of Little Readers Nook, Kolkata is an adorable coming together of an adventure loving kangaroo and a fairy who enjoys shopping! Read on.

Once upon a time there lived a kangaroo named Joey. Joey was playful and  also enjoyed adventures. One day he was playing in the fields with his friends  and family, when suddenly he realized he has lost his way and started to move  deeper and deeper into a dark forest. 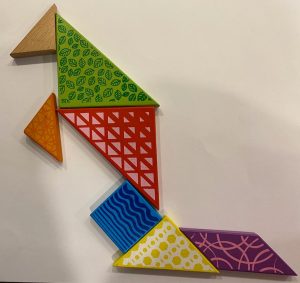 After a while he saw a cave and was nervous to go inside. Then he  remembered his mother always said not to be nervous and face challenges. So he became his brave self and went inside the cave. It was empty but cozy so he decided to stay inside and pray.

After sometime there was a flash of lightning in the dark sky . A beautiful fairy appeared before him and said, “I will grant you one wish.” 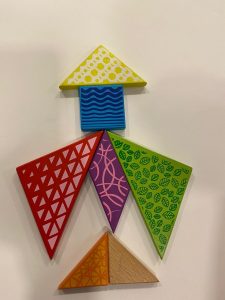 Joey said, “I want to return to my family” and when he opened his eyes the fairy had vanished and he was back with his family. Joey thanked fairy god mother.

Joey was even happier because only he could see the fairy god mother. Next morning Joey and the fairy went to the playground where Joey got hurt so the fairy came to the vet with him. Soon he felt better and they came home for lunch.

Joey wanted to express his gratitude to the fairy so he took her shopping and bought her lots of goodies. The fairy and Joey lived happily ever after.

13 Replies to “‘The Adventures of Joey,’ by Aadya Kheria (8yrs) and Vanya Khaitan (6yrs) from Kolkata-Tangram Story #41”