Hello little ones.  Sharing this extremely creative story by a little author, 7 year old Lavishka Jain from Little Readers Nook Gurgaon. What is this Tangram story about? Well, Tangrams!

It was a sunny hot day, and there lived a girl named Sia, with bright eyes, one  ponytail, baby pink lips and a beautiful pink frock. She was five years old and  lived in a comfortable apartment with her mother and father.

“Aah! It’s so hot,”Sia exclaimed as she was sitting in her balcony fanning  herself. In the meantime her mother got some watermelons to eat. Sia loves  watermelons especially on such a hot day.

After eating it, Sia went inside. She asked her mother, who was working in the  kitchen, “Mummy, what should I do?” Her mother suggested, “Why don’t you  go out and play in the sun?” “No it’s too hot,”Sia refused. “Ok, then read a book,” Mamma advised. “No it’s too boring”, Sia replied.

Sia was being too  picky. She went inside her room with a sigh. She jumped in her bed and said to  herself, “What can I do, Mamma is also busy with her kitchen work?”

Sia’s mother was watching her, and she noticed that she is looking very bored  and gloomy. Mom got an idea and she sat on a dining table and started making  shapes with Rajma beans.

Sia came out of her room to drink water, when she noticed her mother playing  and making different objects from those shapes. Sia got curious and sat there  only looking at her Mamma.

Mamma suggested, “Why don’t you make your own shapes by cutting  colourful paper and after dinner we can make our stories from it”. Sia liked the  idea and immediately rushed to her room to make her game. While she was  cutting the shapes; mom told her that this game is called Tangram and it’s a very fun game. 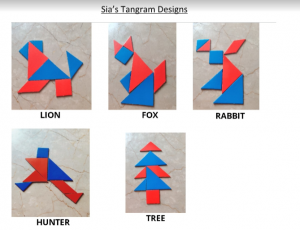 Sia quickly finished making her Tangram shapes and was ready with the story  too. Mamma said, she has to finish her meal and then it would be story time.  Sia, ate her dinner really fast that day. She made a story about Jungle which  had animals like lion, rabbit, fox and also a hunter and lots of tress. From that  day whenever Sia felt bored, Tangram was her first choice.