Hey little ones. Your new best friend Sara here. 5 year old Nayara Tharakan, from Mysore has shared this fun story from Little Readers Nook. Read on! Can you think of a story on this tangrams too? Send them to me at  Sara@bookosmia.com 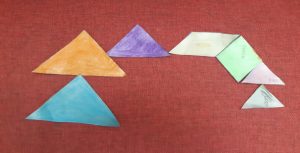 Once upon a time, there was a happy Pyramid family. The Appa (daddy) pyramid and the baby pyramid were best friends. This pyramid family had  been living in the hot desert for many years. One day, the Appa pyramid  peeped out and saw many pyramid families like theirs travelling and settling
down in and around their home. Their sandy neighborhood was becoming  crowded and noisy. So, Appa pyramid decided to shift to another place. He  always wanted to experience the cold. So, the Appa pyramid said bye to his baby and off he went to Antarctica! He was welcomed by the friendly penguins, the sea lions and the polar bears. They looked at him in wonder!

They had never seen a pyramid before. Soon, the Appa pyramid was  everybody’s favourite. The penguins used the pyramid as their sliding slope.  The sea lions went down the sides of the pyramid and splash, they fell into the ice cold waters.

But the Appa pyramid soon began to shiver and freeze as he was not used to  the cold weather and he wanted to leave. But the penguins pleaded with him  to stay back and made him a big warm jacket out of round stones. The Appa  pyramid was very happy and he stayed on there.

Suddenly, the baby pyramid woke up with a start. She ran to Appa pyramid with  her eyes full of tears and said, “Appa, would you be leaving us to go to  Antarctica to live with the penguins and the polar bears?”

Appa laughed and said, “Oh, I would I never leave you ever, little one! But let’s  all go together to Antarctica on a holiday next summers.”

“Thank God it was just a dream!” cried the baby pyramid.