Crabby and Octo, a story on making new friends, by 7 year old  Mihira from Mumbai-Tangram #17

Hey little ones. Your new best friend Sara here. 7 year old  Mihira from Mumbai has shared this fun story from Little Readers Nook. Read on! Can you think of a story on these tangrams too? Send them to me at Sara@bookosmia.com 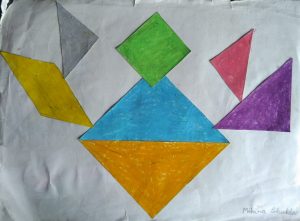 Once upon a time, there lived a crab called Crabby. He was not happy because he had no friends. The other fishes went to school, but Crabby did not go as he didn’t have any friends.

In the same ocean, there lived an octopus named Octo. Just like Crabby, Octo also didn’t have any friends and didn’t go to school. Octo often felt sad as he had no friends.

One day, when Crabby was wandering in the ocean, a large rock fell on him when he was not looking. Crabby got stuck under that rock and cried loudly for help. Octo was swimming nearby and he heard Crabby’s voice. He immediately turned to Crabby. He told Crabby “Don’t worry, I will save you from this giant rock. I have eight hands – I can easily lift this rock using them”.

Octo bravely pushed the rock aside using his strong hands. Crabby came out from under the rock. He said to Octo, “I am really grateful to you for saving me. What is your name?”

“Hi- my name is Octo. What is your name?”
“I am Crabby. Can we be friends?”
Octo replied “Yes of course! I am so happy to meet you, my friend Crabby!”
Octo then told Crabby “I didn’t have any friends till now, and that is why I didn’t go to school.”
Crabby replied “You are my first friend! From tomorrow onwards, we both will go to school together.”
After that day Crabby and Octo went together to school. At the school, they met many fishes, turtles, octopuses and crabs. They both made many new friends. They were both happy as they were not lonely anymore.

Crabby told Octo, “Even though we have many friends now, you will always be my best friend.”
Octo said, “Thank you Crabby! But please don’t get stuck under a rock ever again!”

Both Octo and Crabby laughed heartily on this, hugged each other and
remained best friends forever.

29 Replies to “Crabby and Octo, a story on making new friends, by 7 year old  Mihira from Mumbai-Tangram #17”