Today’s write up is an epistolary work, which means in the form of letters by 10 year old Devaanshi Nathany from Kolkata.

Devaanshi studies in Modern High School for Girls, Kolkata. The magical book  of spells, Harry Potter is her favorite. She likes to run and play but not studying. Without mischief there is nothing for her to do.

Your previous letter is still with me. Apologies for not responding as I was busy  with my trip. It’s so lovely in South America that I don’t get time to see the  letters.

By the way, do you know that when I went to the jungle for studying the  animals with my mates, we saw the most unusual bird! Oilbird was the  creature’s name. It was mainly reddish brown with white spots on its nape and  wings. Its lower parts were cinnamon-buff with white diamond shaped spots  edged in black. These spots started to decrease towards the throat and grew  bigger as they reached the back. 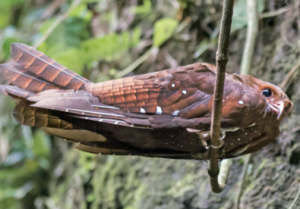 Their stiff tail feathers were rich brown spotted with white on either side. I  came to know that they are a small nocturnal cave-dwelling creature, which  hunts its food by echolocation just like bats and dolphins do. It is also the only  flying, fruit- eating nocturnal bird in the world.

The oilbirds forage at night, with specially adapted eyesight. When I searched  about them in google, I found out that they favor oily, fatty wax palm and avocado fruits, which they pluck from trees with their formidable-looking  hooked beaks. I am not sure whether they migrate but they surely aren’t in broods. And do you know that the oil birds are so oily that people used to boil  them to extract their oil and use it as a fuel! It was a strange observation!

It was a jolly good experience knowing about the bird.

Hey, Sara here again. Did you enjoy that informative write up by Devanshi? It is the first time I have heard of this unique bird. How about some some cool facts on Oilbirds?
Cool Fact#1 : Oilbirds maneuver within its cavern using ‘echolocation’
The oilbird’s most impressive adaptation might be its ability to maneuver within its cavern using echolocation. Unlike bats, which call at a frequency too high for human detection, Oilbirds emit a series of audible-to-humans clicks that ricochet off upcoming obstacles, providing a map of the terrain ahead. How can Oilbirds keep track of their own clicks with so many other birds in the colony? Each Oilbird clicks at a slightly different frequency.

Read more about it at Audobon here 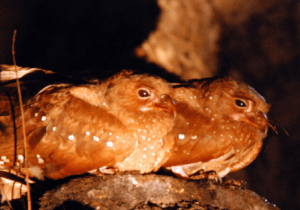 Cool Fact #2: Oilbird’s body enables it to move around in the dark

Their retinas pack one million rods per millimeter—the highest rod density recorded in any vertebrate—which allows their eyes to take in more light than any other bird’s. And those whiskers, pathetic looking though they might be, actually serve a purpose, providing additional sensory cues that help the Oilbird get around, not unlike many mammals.

Wow, thats really cool, right? Would you want to get published on this global writing platform and become a Bookosmian? Here is how to go about it-
https://bookosmia.com/submit-a-story/