11 year old Krishank Jain from Kolkata weaves this fantastic tale of what would happen if Maa Durga came alive now. 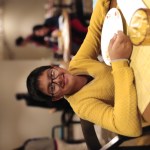 Krishank Jain is a student of South City International School, Kolkata. He loves to read, reread and then repeat. He is fascinated by the Mahabharata and fond  of collecting more and more facts about the epic.  He likes to play cricket and chess.

One day as Maa Durga woke up, she found that she was born on Earth again.

She thought maybe Lord Vishnu had sent her to demolish evil on earth again. She thought it would be a matter of a day or so but she was totally wrong. She  saw with her divine powers that there was evil and only evil on earth.

She did not want to harm anyone on earth. Then an idea struck her mind, she  thought that she would tell the people that she, Maa Durga  was here and the people would of course obey her. People would think many times before doing something evil.

But her plan backfired and when she was out telling people that she was Maa Durga, people shooed her off saying, ”Really you are Maa Durga? There was  another one here ten minutes ago.”

She tried this with each and every person on earth! But only one person  understood that she was the real Maa Durga-The chief priest of the Durga Temple in Kolkata.

He was a very celebrated man in Kolkata and had vowed to never lie so  everybody trusted him but we also know that everybody lies on the earth these days. So all the people still thought that the girl had made an alliance  with the priest to continue the prank.

But then she thought of a foolproof plan.

She showed the world her divine form and lo! All the people began to believe  in her and in a blink of your eye the earth turned evil free!!!!!

Sometimes we really need a reminder that shakes away our evil thoughts.

Want to get published on this global writing platform?