After all, if a story is written for young readers, shouldnt they get to share their review of it?

Here is a wonderful review of the perfect book to follow Halloween celebrations-a Harry Potter book by 11 year old Vanshika Chaudhary, a student of House of Books and Tales, Jaipur. 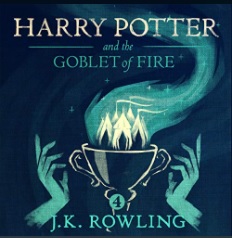 Title : Harry Potter and the Goblet of Fire
Name of the author: Joanne Rowling ( J.K. Rowling)
Completion date : 13/09/20
I bought this novel to start reading the fourth book of the Harry Potter book series.
The cover page of this book was not as appealing as the written content inside the book, which made my first reaction on seeing it quite disappointing. I feel that the cover page of a book should be alluring, that excites the reader to read it; but this book’s cover page wasn’t even describing the main theme of the story, and was rather dull.
I loved the book  because it was thrilling and adventurous, with mind – boggling mysteries.
The main plot of this book was the hosting of the renowned Triwizard Tournament by Hogwarts School of Witchcraft and Wizardry. It was followed by exciting consequences such as the flabbergasting reason so as to why Harry was chosen as a participant by the legendary Goblet of Fire; and what was the real identity of the mysterious man who was behind the mishaps and distortions caused in the final Triwizard Tournament Challenge.
The central idea of this story is accepting things as they are and coping with them in a calm and sensible  manner. According to me, it is relevant as sometimes we may find ourselves in situations where things don’t go the way they are supposed to; and during times like these, it is best to adjust with the changes we face and hope for the best.
The lead character in this book was Harry Potter. He was a curious, courageous, trustworthy and kind-hearted 14 year old wizard. The most interesting and astonishing thing about him was his ability to cope with danger and the loyal and caring nature he bestowed upon his fellow companions.

I liked the character Headmaster Albus Dumbeldore , because he was a calm , experienced and knowledgeable wizard. Undoubtedly worthy of the  Headmaster’s position at Hogwarts. His casual and pleasant way of talking, ability of conjuring uncountable powerful spells with his trusty wand, and humble and modest personality makes him my favourite character in the Harry Potter book series. I disliked Lord Voldemort. His stereotypical hatred of  Muggles and Half – Bloods , stubbornness of getting what he wanted and his pleasure in killing millions of innocent and noble witches and wizards makes him a much feared and dreaded character.

The language of the book was interesting, but at times difficult to read  because of the excessive use of fitting , but difficult adjectives , verbs and nouns I didn’t even know existed ! But that language also improved my reading skills and knowledge of words , which I now use in everyday life.
If I had to change something in the story , it would be the final task assigned to the daring and witty Triwizard Tournament opponents. I feel that after  battling with bloodthirsty dragons and courageously rescuing their dear  friends from the clutches of the defiant Merman under water; making their  ways to the Triwizard Cup by means of an obstacle – filled maze was a bit too simple, and, for wise wizards, easy. I would probably have the opponents duel against each other and offer the winner the trophy.
I would rate the book 4.5 stars out of 5*