Harry Potter And The Chamber Of Secrets – Book Review | Bookosmia 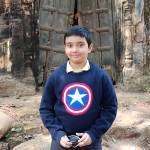 Potterheads will love this one! 8 year old Navoneer Bhattacharyya, a Bookosmian from Kolkata writes a detailed review on Harry Potter and the Chamber of Secrets. What was better, book or the movie? Do read to find out what he thinks.

Navoneer is a student of Birla High School (Junior), Kolkata 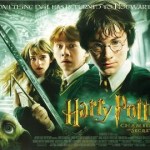 Title: Harry Potter and The Chamber Of Secrets

The cover page shows the Chamber of Secrets where Harry is holding the sword of Gryffindor and behind there is the Basilisk fighting with Fawkes the Phoenix. Behind that, there is a gigantic statue of Salazar Slytherin, under which lies the small figure of Ginny Weasley. This whole picture (especially the Basilisk) made my spine tingle!

I got this book from my mother for doing well in school. 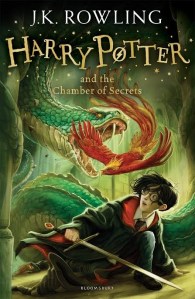 Here is the gist of the story :

‘Harry Potter’s summer has included the worst birthday ever, warnings from a house-elf called Dobby, and rescue from the Dursleys by his friend Ron Weasley in a magic flying car! Back at Hogwarts for his second year, Harry hears strange whispers echo through the empty corridors – and then the attack starts. Students are found as though turned to stone… Dobby’s sinister predictions seem to be coming true.’

This gist at the back cover of this book makes the reader’s spine tingle. It is a kind of suspense.

The writing style of J.K Rowling is absolutely fantastic. So, I have nothing more to say about it. There were no illustrations, so I read and visualized all the scenes in front of me. 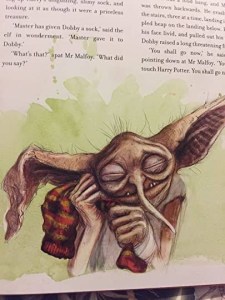 Everything was fine but some points were a bit disappointing. Like perhaps the part when Dumbledore asked Harry, “I must ask you, Harry, whether there is anything you’d like to tell me.” Harry could have easily answered, “I can speak Parsel tongue.” I know there is a secrecy about the myth but lying does not make him any different from Tom Riddle who lied to his headmaster Armando Dippet. I know Ron told him  hearing voices in the wizard world aren’t a good sign. But Albus was his headmaster and the greatest wizard of the age. He surely would have warned Harry about the danger that awaits him because he was the Transfiguration teacher in Hogwarts last time the chamber was opened.

I loved the whole book a lot but there is a special part that I loved the most. Harry never hides anything from his best friends Ron and Hermione. In most books, I have seen that if something supernatural is happening the lead character generally hides that from their friends.

I thought that there was a lot of darkness in this story like killing muggles, giant spiders etc. I would surely change it if I was given a chance.

There was a movie based on Harry Potter and the Chamber of Secrets and it was as good as the story. But they missed some parts like teachers wandering in pairs to find the Heir of Slytherin while Harry and Ron are going to visit Hagrid.

Age group-I think the age group for this book is 8 and up because only they would be able to feel the essence and the eeriness of the story.

Want to have your book review published on this global writing platform? Click here to know how