Hello hello, Sara here! Thanks for pouring in your entries to the exciting Children’s Day contests around wildlife. We found a beautiful way to enjoy nature, while still being locked in, isn’t it?
Don’t miss the creative write up by kids and fun facts by Kaadoo, makers of wildlife-based, table top games and sponsors of the Children’s Day contest prizes. 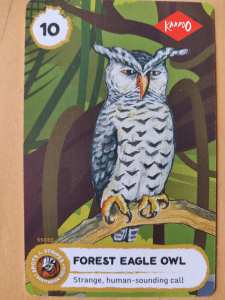 Cool Fact# 1- The spot-bellied eagle-owl is nocturnal and often spends its day hidden in the dense foliage of large forest trees.

While popular belief is that all owls are nocturnal, there are some owl species (~20%) who are diurnal, meaning they are active during the day but rest at night. However, as the young writer Keshav indicates in his write up, the Forest Eagle Owl is primarily nocturnal. 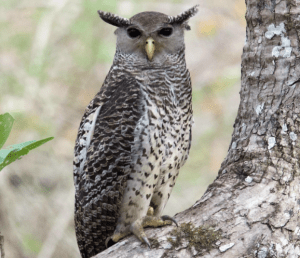 Cool Fact #2– Almost all of the prey for this species is very large and impressive, much of it being presumably as heavy or heavier than the eagle-owls themselves.

This is a very powerful and bold predatory owl, which is assuredly at the top of the avian food chain in its forested range. However, no extensive study of its dietary habits is known. Even in larger eagle-owls such as the Eurasian eagle-owl, although they can and do prey on a wide range of prey including impressively large prey, most of the diet consists of small mammals, often small rodents such as voles and rats.