Hey, your friend Sara here! I am amazed by the flow of your entries for our recently launched ‘Nature with Sara’ section, kicking off with birds that fascinate us.

Today, I am happy to share this touching essay by 10 year old Pratham H Shenoy from EPS Mysore. 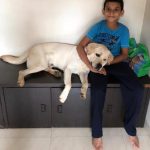 Dont miss this beautiful coming together of a cuckoo bird, a child’s empathy and a wonderful lesson from his grandma.

One day, when I was cycling on the road near my house, I saw a baby bird with a watchman. I recognized the watchman, he looks after a hostel in front of my house.
He called me and he told me that the baby bird is wounded and it is dying. I  asked him if I could take it to my house and give some water to it.
I love animals and birds so I quickly took it and put it in my cycle basket and  went to my house. I asked my grandparents to help me out to save the bird. I  put it in a small box and gave it food and water.
I then had to go attend my painting class. Throughout my painting class, I couldn’t stop thinking about the baby bird. 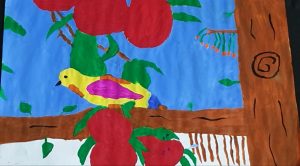 After an hour, I came back running and asked my grandmother how the bird was doing. My grandmother told me that the baby bird was wounded, it tried to fly a few times but it fell down every time. I felt very bad for the baby bird.
My  grandmother also said never give up.
We kept the bird for a few more days and gave it food and water everyday. I  learnt that it was a baby cuckoo. On the fifth day, we suddenly noticed that the  bird was able to fly better. We let it out to fly and it flew away.. to its mother..  Hope that the baby bird is a big and strong bird today.
Please help birds and animals.
Key message- Never give up and please help the birds and animals.

Hey, Sara here again. Did you enjoy that lovely essay? And now its time for some cool facts about Cuckoo birds, shared by Subhadra Devi, a passionate birder.
Cool Fact#1:
Cuckoo bird and its eggs- 10 year old Pratham adorably hopes in his essay that the cuckoo bird grew strong and flew back to its mom. But here is some cool facts about the Cuckoo bird and how it lays its eggs-
There are many species of birds in the cuckoo family in India. Asian Koel is one of them.  Asian Koels are ‘brood parasites,’ a terms that refers to animals  which use other species to raise their chicks. There are birds, insects and even fish that are brood parasites. Asian Koels are seen using Crows (House crow and Large-billed Crow) nests for laying their eggs. These crows then feed and  bring up the Koel chick along with their own chicks. 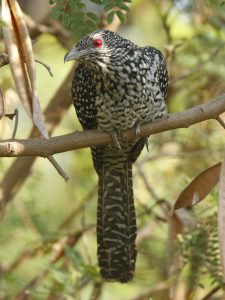 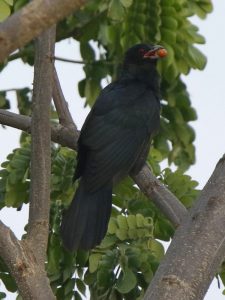 Asian Koel Female (L) and Male (R)
Picture Courtesy- Subhadra Devi
Cuckoo sound-
Asian Koel calls sound like ko-oh, ko-oh. Common Cuckoo is also from the cuckoo family but is not the same as Asian Koel. Common cuckoo male calls cu-ckoo, cu-ckoo.
Cuckoo clocks-
Today, the cuckoo clock is one of the favourite souvenirs of travelers in Germany, Switzerland, and Austria. It has become a cultural icon of Germany.
← Prev Next →
All Activities