Hello young readers, your friend Sara here. I am so excited to see the response to my activity section -book reviews by kids! 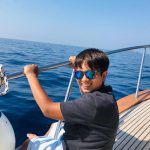 I got this book on my birthday from my good friend.

The book’s cover page was a dark coloured book in a 5 book pack and I thought it was full of mysteries.

The series includes some  teenagers who are amateur sleuths or detectives solving cases and mysteries.

Frank and Joe, together known as Hardy Boys after their surname, are fictional characters who appear in several mysteries trying to solve them and also  sometimes trying help their father Fenton Hardy.  Frank is eighteen, and Joe is seventeen. They live in Bayport on Barmet bay with their world class detective father Fenton Hardy and their mother Laura Hardy. The brothers attend high school in Bayport, where they are in the same grade. In each mystery the boys  are in danger but still try solving mysteries without any fear.

The first mystery was that the Hardy boys’ friend had a car and it was stolen by somebody and when they found where the car was, they got an idea that  the stolen car mystery and tower mystery were connected somehow. The  mystery was that there is a tower in which the Applegate family lives. There are two towers, an old one and a new one.

Just when they figured out the thief and started their investigation, the thief  died in the hospital because of severe injury. The Applegate’s riches and  securities are stolen by a thief and Fenton Hardy, father of the Hardy boys’ was to solve  the case. They try to solve the case with him.

My favourite part of the story was when they solved the case on their own without the help of any adult, by using their brains so efficiently.

The learning we get from the story is that we should not commit any crime because if we do, we only will get harmed eventually.

If I could change something in the book,  I would make the Applegates a little helpful and kind, with a calm behaviour. In the book the Applegate’s are shown as really harsh.

The best age group according to me for this book would be 10 years and above.