Hello young readers, Sara here! Do you know what a Tangram is?Tangram is a dissection puzzle consisting of seven flat polygons, called tans, which are rearranged together to form different shapes and pattenrs. Tangrams are a great learning tool for building STEM skills. 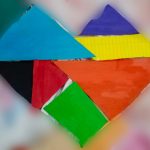 6 year old Saisha Kapoor from Kolkata sends in this extremely creative story along with her  Tangram for it.

Once, upon a time there was a very rich family. They were rich, but did not  boast about it to others. The family lived very happily.

One day, they went to  party at a club which was named “Golden Statue.” They thought it was just the name of the club. But they were wrong. When the  family went inside, they saw hundreds of statues, all in golden colour. The  family members thought it was just for decoration. When they were dancing  at the club, all of a sudden they all turned into statues. This was an enormous  moment for the baby girl of the family, who was named Akshi.

After some time, a golden fairy appeared and touched every one’s head. She
assumed that everyone in the family was aware of the club being a magical one, except for Akshi! She was so surprised that she quickly saved Akshi from staying  a statue. When Akshi turned back to herself from being a statue, she asked the fairy,” Who are you and what happened to my family?”

The fairy replied, “I am the Golden Fairy.” The fairy then told the whole story of  what happened and how that club was a magical one that turned its guests into golden statues. Akshi exclaimed,”Oh, Oh! I am so sorry that I thought  wrong about you and thank you for helping me! But you forgot something,  didn’t you see?”

Akshi then told the Golden Fairy that she did not remember  the way home and also didn’t know how to cook!

“Oh, that shall not be a problem” said the fairy. “I will cast a magic on you and you will know everything,” the fairy said. Just when Akshi was leaving for  home  she turned towards the fairy and said,”Please turn the good people alive again.”

Akshi returned home and after some time the Golden Fairy appeared in front of her. Akshi asked, “What took you so long?”

The fairy said,”When I was coming, my other fairy friends said that they  wanted to meet you because I told them everything about you.”

The Golden Fairy was very happy to hear this from the little girl and with the
help of her magic turned the family members real again.

This showed that Akshi had an enormous heart as she was ready to forgive  people who did not treat her with love.