Hi there book lovers, your friend Sara here! Thanks for pouring in all your wonderful entries. So excited to be running this movement of ‘book reviews for young readers, by young readers!’

So keep reading and keep writing in to me. 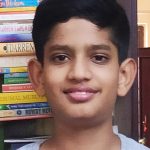 Today’s heartfelt and thorough review comes from 13 year old Swastik Kumar from Jaipur. He is studying in class 8 at Maharaja Sawai Bhawani Singh School, Jaipur and is a student of Young Orators. 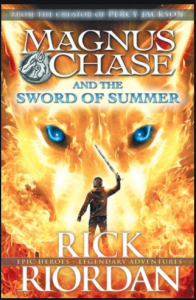 Book- Magnus Chase and The Sword of Summer

“As soon as the flaming blades of Surtr touched me I knew it was the end. I had only one choice to make.”

‘The Sword of Summer’ is the first sequel in Rick Riordan’s Magnus Chase series of three novels
that has sold millions of copies worldwide.

It is an amazing story which puts a cheerful smile to the young and old alike.Rick Riordan is known for his humor, and the twists that we get at the end of the stories.

Magnus Chase is the story about a young demigod son of the god Frey, who  dies valiantly fighting the fire lord Surtr and goes to Valhalla (the place of the noble dead) to spend the remainder of his time preparing for Ragnarok. Ragnarok is often called as the end of the world. It is believed that it would start on the event of Fimblewinter {the last winter}

People say that Magnus Chase is a must read. I think that they could not be  any more right. Rick Riordan spins the story in such a way that you cannot resist yourself to think, what I would have done if I was in that position.

You can see many of the characters in our everyday life. Take Magnus for example. He is gullible and trusts anyone and everyone. He lived a hard life at  the street after his mom died.

Let’s take a look at Samirah. Father has a bad reputation but still she is trying  to get along with the society. As most of his characters are taken from  everyday life, it is easy to relate and understand how they feel.
The main characters of the story are, Magnus, a young Demigod son of Frey who used to live at the street after his Mom died. Samirah, a daughter of Loki who is struggling to make her place among the demigods. Blitzen, a dwarf who has an expertise in clothing and Hearth stone, an elf who cannot hear or speak but has a mastery in runes.

The protagonist of the story is Magnus Chase, while the antagonist is the  flaming demon lord, Surtr.

Valhalla is truly an amazing place to go after you die. The never ending fun. The constant partying. Atop of all this Rick Riordan has described it in lubricious  words and spun it into a tale so great that you feel that you are actually in the halls of Valhalla reliving the experience. But the main aim of Valhalla is to train  the troops for Ragnarok. Even getting in Valhalla is not that easy, you have to go through harrowing trials, and prove that you are worthy for Valhalla.

But for Magnus, things just do not just end there. Many adventures follow the  duo Magnus and Samirah as they go on regular quests. Sometimes to prevent  Ragnarok from happening or on the quest to find a missing weapon of the  gods, that can determine the fate of the world.

This is not the first series of Rick Riordan. He has done it many a times and has been nicknamed the story teller of gods. He has also won the literary award on  the Percy Jackson. He is best known for his works on the Kane Chronicles and the Percy Jackson series.

I really like this book because it takes care of the problems that society face nowadays. I would rate this book a 4.5 out of 5*

It is recommended for the ages of 13 and above.